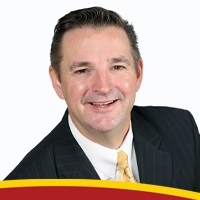 Dean was exposed to investing and financial planning at a very young age when his father would take him to the den each evening to chart out what was made or lost in the stock market. He transitioned into the financial industry at a professional level with Edward Jones in 1998, became a licensed advisor in 2003, and maintained his office in Columbia, MO, until 2008.

In the heat of the Market crash of 2008, Dean transitioned to The Callaway Bank. He assumed the role of their financial advisor which had been vacated by a close friend. While Dean enjoyed the comradery and staff, the bank environment limited the independence he desired.

In the fall of 2009 Dean left the bank, became affiliated with the Investment Centers of America, Inc. (ICA) and instantly became a small business owner. In the fall of 2010, Dean purchased a historic building in downtown Moberly, which he operates from to this day. In 2017 ICA was acquired by LPL Financial, the largest independent Broker Dealer in the nation*. LPL provides him with world class tools so he can provide the personalized service we all desire.

When not helping clients pursue their financial dreams, you will find Dean pursuing one of his many outdoor interests such as fishing, hunting, skeet shooting and more.  In recent years Dean has developed a passion for crow hunting. In fact, Dean may be the only person you meet who eats crow and likes it.

Other interests of Dean include DIY projects around the house, cooking (especially what he harvests), and of course spending time with his lovely wife. The two of them enjoy traveling, fine dining and listening to live music together. Dean believes in a “work hard/play hard” mentality and has always been full of energy. Ask him about the do-nothing weekend he planned with his (then) future wife and he will share with you a story involving the early morning buzz of a chain saw.

Dean earned a B.S. in Parks, Recreation and Tourism from the University of Missouri – Columbia, fostered by his love for all things outdoors.  Later, he earned his degree as an Accredited Asset Management Specialist from the College of Financial Planning. He holds the following registrations and licenses: Series 7, 63, and 66 (through LPL Financial) as well as Life and Health Insurance Licenses.

*As reported by Financial Planning magazine, June 1996-2020, based on total revenue.